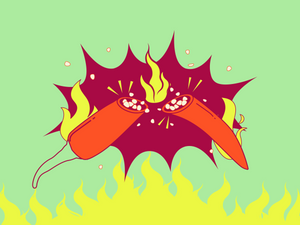 “You’re an Asian food brand? Is everything super spicy?” We get this question...a lot.

“Spicy” seems like an innocuous word - but it often comes loaded with a lot of assumptions about certain cuisines (and even the communities from which they arise!). Let's unpack that a little:

● These sorts of generalizations can feel like microaggressions: when we take a facet of a cuisine + apply it to the rest, it removes space for the complexity + multitudes within.

● To hinge our understanding of a cuisine on one singular aspect (“spicy”) is reductive - especially if it is rooted in a Western view of the cuisine.

● This can be flattening + restrictive to these cuisines + creators →

“Here, Indian food is associated with relatively greasy, spicy, one-dimensional cooking. Most of the Indian food I eat is not particularly spicy, but in the Western world, Indian food has become synonymous with cheap curry that is highly spiced. Americans might say 'it's not authentic, because it's not spicy,' but that's an absurd caricature of Indian food. Indian food is not necessarily spicy. In fact, a great deal of it is not spicy at all.” (Washington Post)

● We talk a lot about the term “authentic” (feel free to read our blog post on this term!)

● A dish’s “spiciness” is not necessarily correlated to its “authenticity” - this once again anchors on a Western-centric view of cuisines from communities of color.

● These dishes are crafted intentionally, and sometimes a hint of spice is meant to be just that — mouth-numbing spice isn’t a universal signal of “the real deal”.

👉🏽 Try instead: “I personally really love when a chili oil has a lot of spice!”

● A recent “Flavor Trend Category Report” by Technomic concludes that Asian people have the highest tolerance for spicy foods, while Caucasians have the least.

● While it’s easy to joke about various cultures’ spice tolerances (or lack thereof!), it’s difficult to have a truly universal understanding of spice tolerance.

● While we try our best with things like spice meters or phrases like “Thai spicy,” it ultimately is an imperfect, if contrived measure.

● Please bring open-mindedness and patience as folks navigate their own spice tolerances, while leaving room for chefs + food creators to live their truths through what they cook!

👉🏽 Try instead: “This dish is a bit too spicy for my own personal taste!”

BONUS: While we’re here, don’t use spicy to describe people!

● “Spicy” exists alongside other backhanded “compliments” that are often used to objectify, fetishize, and “other” women -- like “exotic,” for example.

● The Tempest: “We, as an entire community of women, deserve better than to be equated to food that is also often described as “juicy” or “exotic.” We deserve better than the senseless thought that we are nothing more than food in which this plate is simply lusted after, used and easily tossed away.”

👉🏽 Try instead: Not using singular food adjectives to describe women of color 🙃 news
How calling for “authenticity” can be a burden news
The Roots of Anti-MSG Xenophobia news
Why does the “ethnic” aisle still exist?