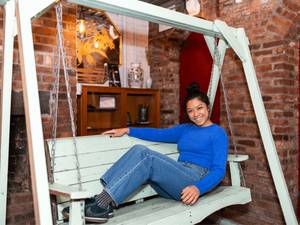 “Girl boss” may be the most overused word - but if that term ever had meaning, it’s reflected in Amelie Kang’s relentless drive. Named one of Eater’s Young Guns in 2018, Amelie is a force to be reckoned with for such a young restaurateur. She moved from Tangshan to America right after high school, where she then attended the Culinary Institute of America.

What struck us about Amelie is her quiet confidence. She has a silent fearlessness to her that some can mistake for reservation.

That energy is what led her to opening MáLà Project - after graduating from CIA and with a soon-to-expire visa, Amelie decided to make the jump and open a restaurant. And not just any restaurant - one that would introduce mala dry pots to the NYC ecosystem.

She’s doing just that - but in her classic, quirky Amelie style. In addition to adapting her two restaurants to the pandemic, she’s also launching a line of products and a YouTube channel! Don’t underestimate Amelie - she’s not one to be slept on.

It’s that fire that makes Amelie the best Tastemaker to collab with on our fiery, tingly Mala Salad Starter -- an homage to a dish on her menu, the spicy smashed cucumbers. Get into it + see if you’re down to ride the spicy, tingly waves with us 🔥