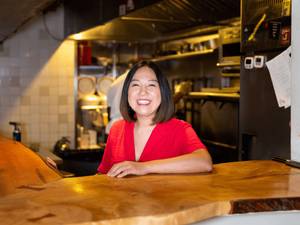 There’s no “one way” to be a restaurateur - and Maiko Kyogoku’s experience is testament to that. Despite growing up in her father’s sushi restaurant, Maiko ended up in NYC after studying at Barnard College, where she majored in Spanish Language + Culture. Even cooler - she had a short stint on Sesame Street (the coolest of streets!) and ended up working in children’s publishing upon graduation.

Maiko’s resume reads as every chic New Yorker’s dream - she also worked as famed artist Takashi Murakami’s right hand, traveling around the world and opening shows for him.

Upon returning back to New York, she joined the Thompson Hotels as food & beverage director. Through it all, she always returned to what felt the most like home - restaurants.

She opened Bessou in 2016 to bring Japanese-American comfort food to the East Village - and as the New York Times notes, “with an artist’s sensibility.”

“It’s the food I grew up eating and the food I love most. In my everyday cooking, I take different ingredients and pair them with classic Japanese dishes. Growing up bi-culturally is like viewing the world through a multi-layered prism.”

She’s not here to play exactly by the traditional Japanese technique, but she’s also not here to overwhelm + peacock with flashy food.

There is a perfect balance of refinement + whimsy to everything that Maiko touches - and our Japanese Yuzu Misoyaki Starter is no different. Take a bite + dive deep into the tangy, umami-packed glazed goodness.