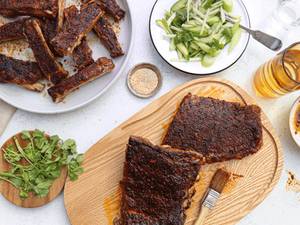 We teamed up with the crew at Equal Parts, a kickass brand that makes non-stick, non-toxic cookware on damn delicious recipe riffs, featuring our new East Asian line of starters. We love these slow-cooked, caramelized ribs, featuring our Chinese Mala Salad Starter, served with a refreshing, crunchy apple salad.

麻辣凉菜: a bold, savory salad with a tingly Sichuan kick. GET THE DROP WHEN IT’S HOT!

to get fresh recipes, cooking tips, and hot takes 🔥