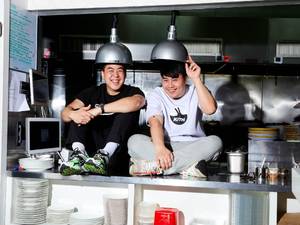 When we met Chaht and Ohm Suansilphong (the brother-chefs behind Fish Cheeks), we fell in love with the sibling connection and their dedication to uncompromising Thai flavors, pulled from their upbringing and studies in Bangkok.

Chaht and Ohm have very different personalities, both such delights to work with.

Chaht, even-keeled, unfailingly kind, and gentle - Ohm, quiet, his personality erupting in different ways, expressive in his eyes and behaviorisms.

His peace comes from his presence in the kitchen, moving with insane speed (we had to film him at 2x because of how fast he moves!). We’d be remiss to not mention the glue that holds the Fish Cheeks empire together, the boss lady and co-founder herself, Jenn Saesue. She wrangles the whole team and continues the restaurant's innovation (even amidst a global pandemic) - all the while keeping the skincare routine fire! She’s a restaurant MVP who cut her teeth in restaurants for 10+ years and also runs Chicks Isan alongside Ohm.

In a country where most Thai cuisine has been made very sweet to match mainstream American palates, the Suansilphong brothers eschew that path for the road less taken. When Pete Wells, famed New York Times restaurant critic, bestowed the restaurant a prestigious one-star review in 2016, droves of hungry new customers followed. When asked if they adjusted their dishes to placate this more mainstream audience, Chaht doesn’t even flinch.

Without skipping a beat, he said no, nothing on the menu changed. “We did not compromise on the flavor at all.”

The Fish Cheeks brothers don’t pull their punches - or their peppers! Proud, loud, and fiery: we can’t imagine better Tastemakers to collaborate with for our fiery Omsom Thai Larb Starter. ลาบ: a fiery minced salad with a citrus burst.